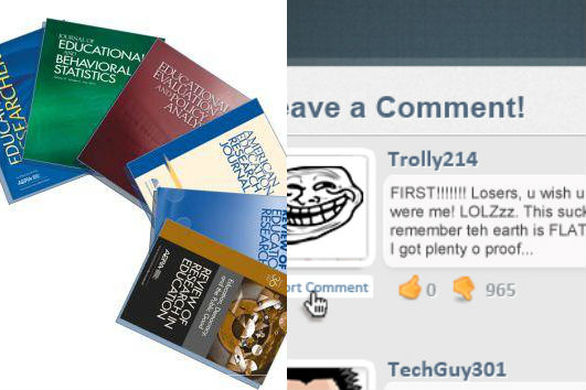 Images courtesy of AERA and PC Magazine
December 18, 2015 – Admitting that they had failed to build a consensus on how best to provide academic evaluations for new studies by qualified peers, the scientific community has announced that they will be switching over to Plan B: releasing the papers publicly on social media and allowing internet commenters to formulate opinions through open discussion.

“It seemed like people were fed up with the previous peer review standards, by which all manner of research and scholarly findings would be deemed thorough and legitimate by fellow professionals of the same field,” said noted scientist Albert Poindexter. “So instead, we thought it prudent to gather the views of average citizens posting on Facebook or Reddit, picking apart aspects of the published findings which they don't like, or which they find to be “utter bullshit.”

Several universities and think tanks have already begun implementing the new review standards by posting full research papers to their websites and Facebook pages. The response to the new system has been overwhelmingly positive, while comments reviewing the studies themselves have been overwhelmingly negative and vitriolic.

“This algae study has no basis in the modern world, and should be burned at the earliest convenience,” wrote one Reddit commenter about a study from Boston University. “The school, nay, the entire city of Boston should be ashamed that this sensationalist turd of a study made it past the desk of their webpage editors.”

Scientific journalists have scrambled to collate the assorted views of hundreds of thousands of uneducated, often anonymous critics of these in-depth studies, many of which required years of data gathering and analysis. While many are pleased with having such a plethora of viewpoints available, some are surprised by the oddly political tone of some of the criticism.

“Oh look at this, another hippie liberal commie research paper full of leftist Obamanalysis,” someone wrote in response to a study of seal migration patterns. “God created the oceans and Jesus then walked on them, which makes this whole study fatally misleading. Burn in hell, socialist fag!”

“I know to some it might seem like we're throwing the baby out with the bathwater,” said Poindexter in response to some minor critiques of this new method. “But this is the way science has steered, with everyone deciding the facts for themselves, and we in the academic community are simply trying to keep up with what's hip.

“Besides, you should check out this new independently published study on a children's health blog about throwing out your baby with the bathwater. A lot of people seem to think it could promote long-term wellness!”

Research & Reviews has announced that its published works will now include extended footnotes, to accommodate prolonged sub-comment discussions about whether or not the original commenter is in fact a douchenozzle.