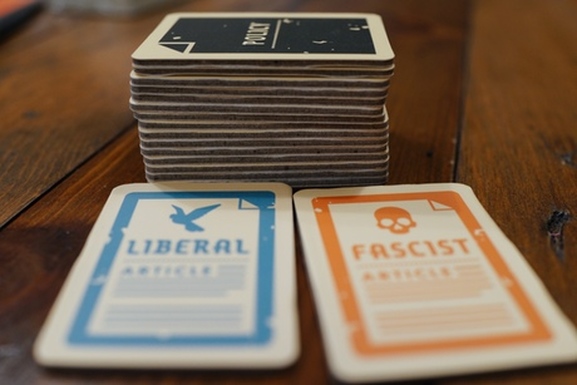 
January 6, 2016 - Every American has heard of the board game Monopoly; most have sat around a table for three hours and played it. Well, move over Oriental Avenue, there is a soon-to-be-released even more controversial game that is demanding the nation's attention, as players gleefully shout derogatory epithets at each other in bad German accents.

The game in question is Secret Hitler, a social deduction party game co-designed by Max Temkin, the brain behind the bestselling Cards Against Humanity. Predicted to be most popular among teens and twenty-somethings, the game has already garnered a rabid following even before hitting the game store shelves.


Secret Hitler is played by splitting into two teams: The Liberals, who don’t know anybody’s political identity other than their own; and the Fascists, who have the luxury of knowing who their teammates are. One lucky Fascist mensch actually gets to play the role of Secret Hitler, as the two teams battle for power and leadership in pre-Nazi Germany.

This brings us to open-minded young gamer Mordecai Gold, 17, of Upper West Side Manhattan. On Tuesday night, Gold and four of his close buddies got together to play a prototype version of Secret Hitler.

“I looked at my identity card, and almost fainted when I saw I was Secret Hitler,” Gold stated.“ I knew there was a twenty percent chance I’d become Hitler, but I never thought that God would play such a cruel trick on me. I felt an immediate change within, and discreetly rubbed my upper lip to make sure there was no tiny mustache growing under my nose.”

“Then I saw that my Fascist teammate was the only other Jewish kid playing, Ryan Christianson,” Gold continued. “There's a long and very interesting explanation for his surname.” [Christianson refused to comment on this story.]

“When it dawned on me that the only two real life Jews present were the fake Fascists, the first two Yiddish words that came to my mind were 'oy' and 'vey.' I knew we were doomed; there was absolutely no way we were going to win the game. I mean, we Jews aren’t the most intimidating of people. Except for that Elizabeth Warren, she’s got some chutzpah... wait, she’s not Jewish? See, we have nobody!”

The game continued, and the Fascist team of Gold and Christianson was not fairing well. Gold recounts, “That's when I remembered the story of David and Goliath, and thought we might have a fighting chance. We could win this. The Jewish-soon-to-be-Nazis could actually take over Germany.”
But it wasn’t meant to be, as Gold’s three Liberal friends assassinated him during the penultimate round of the game.

“But the real mistake I made was not during the actual playing of the game,” Gold reflected. “After we lost, I went upstairs to tell Bubbe Maxine about the game while she was making a real mean noodle kugel. I told her with an innocent, beaming smile that I got to play as Hitler.

“Imagine the extreme disappointment and anger exuding from the most stereotypically Jewish woman ever. I thought she was going to have a heart attack right there, God forbid. She yelled at me, ‘You’re completely meshuganah. Why would you play such a filthy game? Everyone is going to think you are a Neo-Nazi or a skinhead. Oy gevalt.’ I told her, everyone knows I’m Jewish, my name is Mordecai Gold for heaven’s sake, and I wear a yarmulke every day.

Despite family protests, Gold has decided that Secret Hitler is too much fun to pass on the opportunity of playing again. In fact, he has scheduled a meet-up tomorrow night to play with ten of his best friends at his Synagogue.

6“As long as Rabbi Kahn gets the humor, sees that the game is kosher, and doesn’t go Half-Hitler on us by refusing us entry into the Temple, I think it should be fine.”