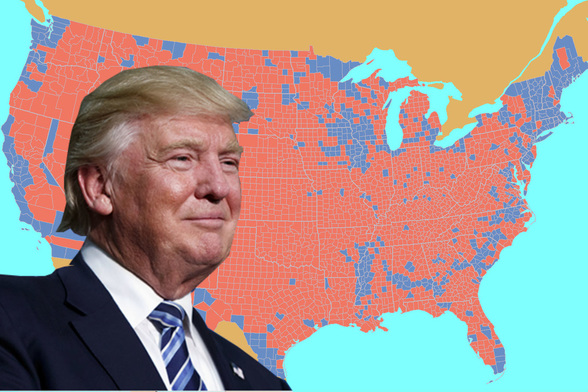 November 9, 2016 – Millions of city residents across the United States awoke Wednesday morning and confidently opened their laptops or iPhones to check their newsfeeds, only to learn for the first time of the existence of a previously unheard-of part of the country known as “middle America.”

“Who the hell are these people, and where the hell are they coming from?” Philadelphia resident Shannon Cordwainer bellowed into her Facebook timeline. “There's apparently as many of them as there are people like me, and yet I don't see a single friend of mine who's happy. Did they all appear through a rip in spacetime to an alternate universe or something?”

The knowledge came as an especially harsh blow to city folk, after two years in which social media, mainstream media, online media and polls had convinced them that the only America in existence was the America with a gay bar down the street and a Whole Foods within driving distance. They were particularly surprised to learn that this sci-fi vision of an angry dystopian America existed not just in the deep South, but in many cases within their own states.

“I just don't get it. I consider myself an avid traveler, and yet I've never heard of this place,” said Ann Arbor resident and student Parker Randolph. “I've been to New York, LA, Miami, Portland, DC, other Portland, Seattle, San Francisco, Albuquerque... not to mention all my travels outside the country in fun, safe areas of the world. I'm not even sure I could point to this “middle America” on a map.

“Though come to think of it, I may have driven through it at one point when my Waze app took me in the wrong direction. Is that what all those burnt-out factories and scary-looking suburbs were?”

Most city residents say they intend to try and connect more with this mysterious part of the country going forward, by tweeting angrily at them and lamenting their character flaws along with like-minded friends.