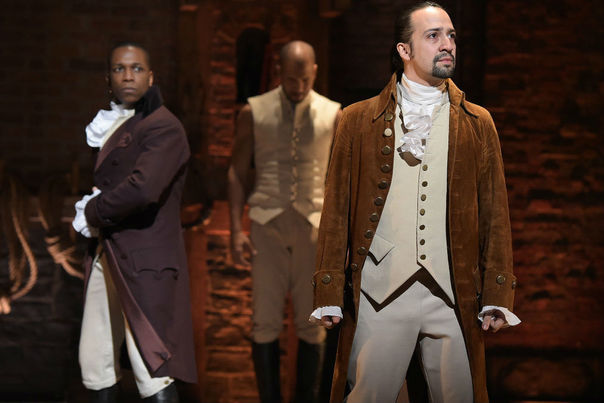 Photo courtesy of Theo Wargo/WireImage
February 18, 2016 – Following their surprise win at the Grammys for Best Musical Theater Album, the Broadway show Hamilton has come under added media scrutiny over its choice to portray America's Founding Fathers as rap-battling songbirds, employing mostly black and Latino actors. While the production has received some praise in the art world, writer and star Lin-Manuel Miranda, along with the show's producers, have admitted that a music-less play starring only old white men might have won over skeptics, and helped the show achieve greater commercial success.

The Grammy telecast was Hamilton's first televised introduction to pop culture outside of the Broadway scene, and while many celebrated the performance, there were also plenty of online doubters and naysayers to point out that the Founding Fathers were, in fact, white men, and should only be portrayed as such. While the creators knew that the show would be controversial, this feedback has caused them to reflect on the sheer number of die-hard theater fans whose business they'd lost out on by choosing to infuse the show with rap instead of measured 18th-century dialogue.

“I, for one, feel that it's historically dishonest to portray well-known Founding Father Alexander Hamilton as non-white,” wrote A.O.L. commenter MCHammerstein. “There's no way I'd sit through that garbage. Which is a real shame, cuz I'm a huge fan of classic musicals, Oklahoma and Wicked being a few of my favorites. I'm all about supporting the arts, but I have to draw the line somewhere.”

Many other self-proclaimed critics took particular exception to a Latino actor playing Hamilton, a man who was born in the Caribbean islands. When various sub-commenters brought to their attention that presidents Washington, Jefferson and Madison are all played by black men, it is assumed that the original commenters spontaneously combusted.

Nevertheless, Miranda and company expressed regret yesterday that they didn't try to appeal to a wider audience of honkies and amateur historians. They feel that, had they done more, like chopping out the show's 46 songs and hiring an all-white cast to perform scenes about the conception of America's banking system, the average ticket price might have risen above a meager $411.

“I should have known that my fellow minorities are only possessed of a small amount of disposable income to help keep our little show afloat,” Miranda wrote to fans. “I suppose it was naïve to imagine any American of color would be interested in seeing the nation's history told through their eyes. If I'd just cast Norbert Leo Butz instead of rapper Daveed Diggs to play Thomas Jefferson, I totally would have won over the musical-loving online troll community.

“Never fear though, we're gonna go back to the drawing board and make some changes. If we just tweak the show a little bit to make it a little more sheltered racist-accessible, we might actually push our sold-out date past 2022.”

In a particular bid to win over online fans of traditional American history and values, the show is being rewritten so that the female characters never speak.