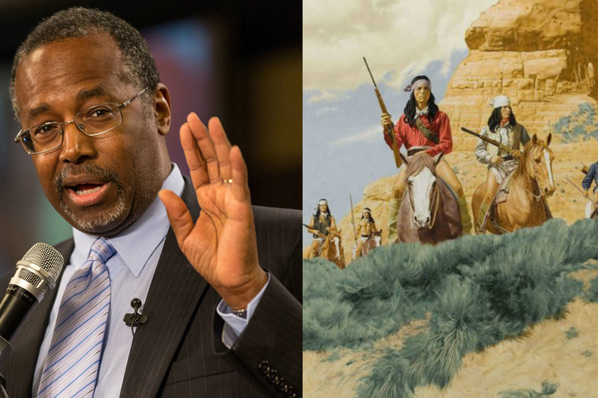 October 12, 2015 – Quintupling down on his controversial remarks in the wake of the Oregon school shooting, neurosurgeon and presidential candidate Ben Carson stated in an interview that the genocide of the Native Americans, and the subsequent formation of the United States of America, could have been prevented if the Indian tribes had had guns.

“I consider myself an expert on one subject, and that's history,” Carson told Chris Wallace on FOX News Sunday. “And it seems clear to me that if the Cherokee and their allies had carried personal handguns upon the arrival of European settlers to the East Coast, this whole American experiment could have been avoided.”

Citing his own in-depth research, Carson insisted that the “civilized tribes” of the 17th and 18th centuries had grown too accustomed to forfeiting their rights to the emerging colonial government, so that when the Treaty of Ghent and the presidency of Andrew Jackson both came about, they had left themselves defenseless. Unrestricted firearms rights could have prevented all of that.

“If they'd drawn up their own Constitution, with its own Second Amendment, there is no way that Jackson would have been able to enact the “Trail of Tears.” Hell, looking further back, if Pocahontas had simply aimed her AK-47 right between Columbus' eyes from the shore, he probably would have turned right back around.

“Instead, they just stood there and let themselves get shot, until nearly all of them were wiped out.” Carson then proceeded to chuckle to himself.

When asked by Wallace whether he thought it was right that, with the proper armaments, small groups like the remaining Native Americans or anti-federalist conservatives could effectively disrupt the government and hold it hostage, Carson explained why he thought that was a good thing.

“As a general rule, if you don't like something, you should have the right to shoot it,” he said. “Lots of people don't like the government, and I'm encouraging any of them, liberal, conservative or otherwise, to tool up and take matters into your own hands.

“Better late than never,” he concluded. “If Tecumseh had thought harder about his personal protection, maybe we wouldn't be in the mess we are today, with out-of-control entitlement spending and a black president. Ick.”